Get the latest guidelines and news on deals from us

Each order will be shipped within 48 hours

Within 24 hours respond on email or whatsapp

How to setup the Timer Time-lapse Video?

How to get high quality timelapse videos?

The Focus Tool Without Removing the Beagle Camera Case

Let customers speak for us

I'm using Beagle Cam to control my Prusa MK3S+ and in general it works as good as I had hoped. I'm not really interested in the time lapse functionality. I tested it, but it caused more issues than the videos would be worth to me (rapidly moving the print bed just to snap a picture can cause stringing and can cause instable prints to bend or even tip over).

The features that I'm actually interested in are monitoring the printer that is tucked away in the basement and remote controlling prints without playing SD card jockey. Those work as expected. It would be nice to have an option to send gcode directly from PrusaSlicer, but the WebUI is okay, too. The IR light for dark rooms is a nice feature. The camera lens angle could be a little wider considering the usually tight space in printer enclosures.

Another positive surprise to me is that the Wifi connection works nicely even in our basement where the reception usually is not the best. Video runs smoothly, though. Almost on par with my octoprint. Can’t print directly from my slicer but can easily upload the gcode and then choose to print. Once printing you can’t adjust any speeds. In total it’s a nice way to wirelessly send and start printing and is the best mist affordable option when octoprint in not available. For the price it is actually the best option. Here’s a video from a mini 3d printer that doesn’t warrant the expense of octoprint.

easy to use and configure.
I would soon have a second one for my other printer

Works very well but can be very hard to prevent stringing when using time-lapse mode when I want to move the print head out of the way. All in all very happy and definitely worth it!

Thought I would test it with large print so I generated gcode on Prusa Slicer for upload to the camera. Prusa Slicer estimated the print time to be 3 days, 18 hours, and 23 minutes. We're coming up on that time now and the print is almost finished. The camera has been communicating perfectly with the printer and the print (of a full size human skull) looks great. However, for some reason unknown to me, the application stopped being able to access the camera on the 2nd day of the print. It just indicates that the camera is offline and I'm also unable to access it from the browser on my PC as well. So, I ended up installing a 2nd camera to monitor my print job. At least it's still printing though.

Also, oddly, I'm unable to get my phone and table signed into the app at the same time. I have to sign one out to be able to sign the other device in. This is absurd. I should be able to be simultaneously logged in from mutiple devices for monitoring and management of the camera. I ended up creating a new user account in the app and then sharing my camera with that new account in order to monitor the printer progress from my other device.

Lastly, while my Prusa Slicer application estimated the printer time at just over 3 days and 18 hours, the beagle camera was estimating roughly 2.5 hours. After 3 hours the camera indicated 00:00:00 print time remaining. Then, several hours after that the print time remaining had changed to 99:99:99 and was frozen there. The next time I checked (some hours later) the time was back to counting down from 99:99:99. Unfortunately the camera stopped responding to the app or web browser after that so I'm unable to update you as to the accuracy of the print time countdown anymore.

At this point I'll have to wait a few more hours for the print to complete before I can reboot the camera and find out if it continued recording a time lapse or not. Never had any problem with stringing on the "Clear Timelapse" setting during the whole print which is excellent, but then that's attributable to the printer rather than the camera, but nice to know that I can use that camera's feature without any issues with my Prusa i3 MK3S+ 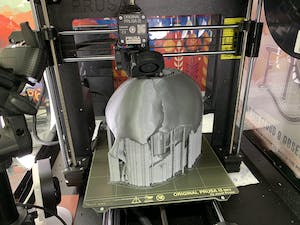 The Beagle camera worked great . Eazy setup and fun to use. My iphone and Windows software work great. I am very happy with my purchase. Good value. To be honest, I wasn't expecting how much this camera actually functions. I love the fact that I can hook this up to my ender 3 s1 and be able to send files to be printed right away. It's much more than just a nice little time-lapse camera! With the prices on pi boards this last year, this is a perfect little replacement and you really don't need to know any programing to use it. The hardest part was linking it up to your wifi. That's it.

I can only think of two things that bug me but I'm sure there are ways around. I know they are fixing this issue at the moment but the big one is when filament runs out, it doesn't really matter if my printer has the ability already built in to detect that. The other issue is the ease of fixing the lens so it's not too blurry on the printing process. I know they provide methods to do this but it would be really nice not to have to take my camera apart or have to print extras in order to refocus the lens. I don't mind manually doing it myself though. Just wish it was simpler to do.

This takes the place of a Raspberry PI and Octoprint with the added benefits of taking 3D videos. Easy to set up and easy to use. I plan to get a second one soon. This is extremely easy to set up. You can see on your phone how the print is doing and you can adjust anything like the speed or the temperature of the hot end. I even put one of my printers upstairs and I can watch it from my chair in the livingroom. I highly recommend this setup. The company has been very responsive to issues and improvements. I understand software and hardware upgrades are coming soon. I have a camera by each printer, as you can see in the photo. I can watch 2 printers at once here. Once I used one camera to watch the fillament spool as itwas going to run out. Very handy. 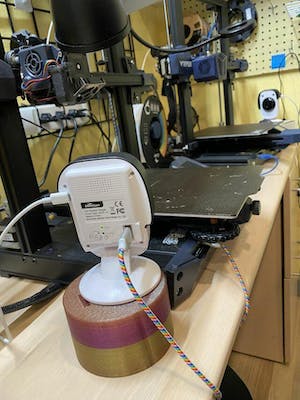 I own several Raspberry Pi's and bought this product as a possible replacement. This is a very good system and has a seamless interface with my printers. It is faster than a Raspberry to connect and if you are familiar with Octoprint, then you will have no problems managing the interface with this system. Picture quality is very good, and upload to the system is faster than with the Raspberry. The streaming of the camera is very good with little lag time and in comparison with my Raspberry and Wyze 2 or Logitech 920 cams, better overall. Setup of the system is easy, just follow the instructions on the phone app. Also, you can control the system via your PC which I do, and have attached a photo of what this looks like on my Laptop. The other attached pictures show snapshots from two of my printers using this system, a Prusa Mini + and a Creality Ender 2 Pro both taken with the only lighting in the room being a mounted LED on the printer. The timelapse video is one of a failed print on my Ender Pro 2 but would aid you in determining what possibly went wrong with your print for troubleshooting. All in all, an excellent system to monitor and control your 3D printer. Would I buy another, well yes, three more in fact! 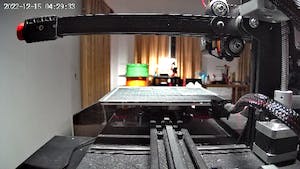